Firstly.. I have no computer and no laptop or tablet.. So I am using the mobile app. Photos will be in off orders and no captions.  I'm sorry.
Monday was a busy day..  Started actually on Sunday.. Packing at the last minute.. Then changing  bags then repacking and me being so very tired.. I eventually gave up and headed to bed.
Monday was an early 5am wakeup so we could get the second train of the day and get to the airport early.  Monday at Sydney airport is a nightmare more than usual.
We were correct to be early..  The line at the airport for bag drop off was the Length of the terminal and almost  out the door.  David and I made friends with the lady stuck in front of us and I ended up scoring a rather nice pen off her.
Bags dropped..  We headed for the undressing check.. And my usual "random"  bomb check.  I am always picked.. Except this time.  I was behind a tiny lady wearing a barque and with three small children.  She had her hands full and of course..  She was the "random" Ha.  They weren't doing anything and basically pounced in this poor woman.  Bah. I hate airports
I found a Hudsons and got a fabulously yummy yoghurt and a delicious coffee.  It was excellent
I couldn't find D.. So I took a deep breath and boarded the plane all by myself.  Had a small incident when the guy walking down the aisle in front of me stopped suddenly.. So I crashed into him.. And.... The stewardess behind me crashed into me spilling Orange juice and water over my camera bag.  Oops.  She was all apologetic but frankly.. It was the guy in front who was at fault.  Grump.
Settled in.  The seats even in cattle class on this Airbus A330-200 were very comfortable and soon D appeared and settled in.  I found the plane had bbt season 7 from. Episode 7 onwards and I had not seen any of S7 so I used that to distract me for 3of the 4 hours..  Win. I was still thrilled to arrive on the ground unscathed in Perth.
I have not been to Perth for decades.
Luggage collection took ages.. But I like playing choose a bag..  You may get a good one one day.
The local Transperth  bus to Burswood station and change to a local electric train.
Another change at Perth  station... Then.... Change again to a rail replacement bus at Fremantle North as a ship has hit the rail  bridge late last week.  Bah.  This was an old old bus and I couldn't lift my suitcase onto the bus.  I was lucky a lovely young man was strong enough to do so. We were dropped off at Fremantle where we walked to Fremantle City Hostel.
The guy behind the counter was almost finished checking us in when he took a call for a reservation and took that!  Seriously dude..  When you have a customer at your desk..  You are supposed to tell the phone person to hold the line!  Unbelievable.  Upstairs.. I made D carry my suitcase..  We got a basic.. Barely acceptable in cleanliness room near the toilet. And fore escape.  Oo win. Haha the showers were filthy as was the men's (David told me)
We dumped the stuff and had to zoom away again to get yet another Transperth bus to Port Coogee to shoot the
Woodman point lighthouse. I stopped for a Mr whippy because it was there. Heeheehee I'm. On holiday
Woodman point is a limestone Lighthouse built 1902 it's 9.8m high   Nowadays it's behind a heap of security. Back to Fremantle for a walk to the South Mole where David met a cute couple.  South  Mole was built and lit  in 1903.  It's made of cast iron and is 15m high.  It is painted green and it's mate the North Mole. Is. Painted red. North Mole was completed in 1906 and is also 15m high and cast iron. When the two lights are lit they are green and red and rather like Xmas trees.
We returned to the hotel and had a bex and a good lie down. A full day. the couple David had met rang and we joined them for dinner.  A great end to a very full day. 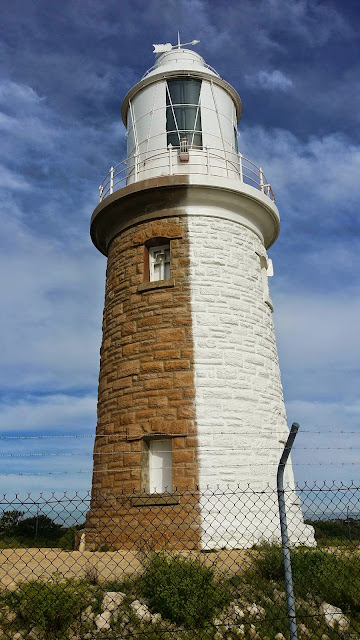 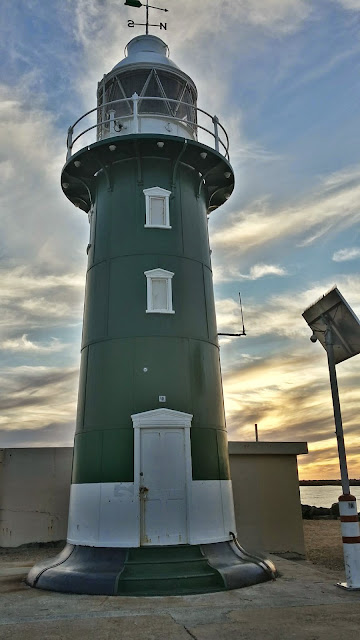 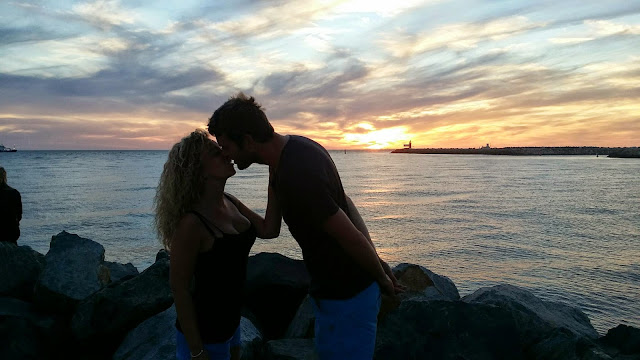 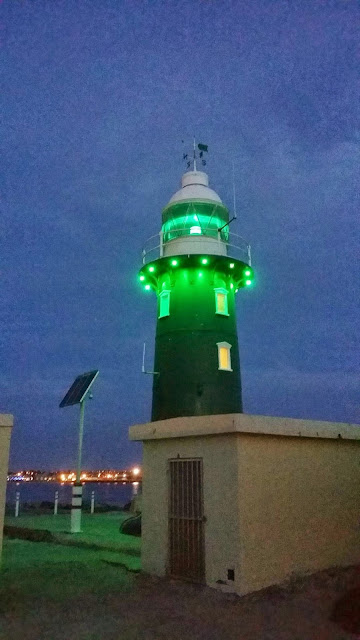 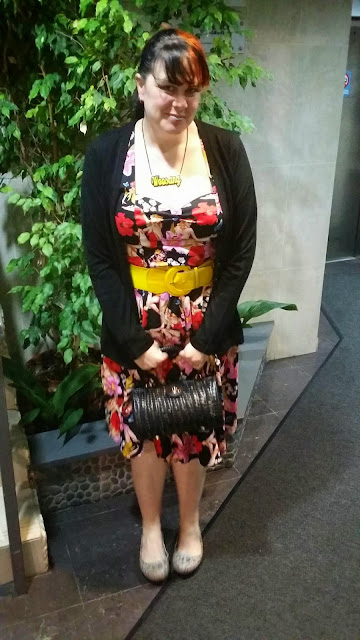