I don't plan these, really. The fact that I am sitting at Mittagong station on a Sunday afternoon proves this. It's 1523hrs and I still have until 1600 until the train leaves Moss Vale. The down trains to Moss Vale are delayed 30 minutes, making this the best option.

Thursday evening, David came home. Finally, but of course it was to use as a base camp for the museum work coming up. :-( Still better than never seeing him. He bought me some groceries :-)

Good Friday was annoying In that everything is closed. We ate the 4 hot crossed buns in the house. Yummy. David watched 6 episodes of an ABC show he had heard about. It wasn't bad.. After which, we mowed the front. David got whipper snippering so the front looks good. The back is a lost jungle.
We allowed some of the snakes to sun in the front yard.

David then arranged to visit his father in hospital. In Kogarah. People drive so stupidly in public holidays, but we got an awesome park. His father has the best view. If you have to be in hospital then this is a great room to have. Me, being sick stayed away from everyone.
Gave his mother a lift to her place and headed to Helen's place. She was, luckily, home. Alas she has no immune system, so, again I was segregated. She insisted on dinner, so our all you can eat will have to wait for another month. Still, like, me, her husband is away so she is lonely. I get this.

Home late so straight to bed after I shaved off David's hair.

Saturday was a rush. I was told I had until lunch time.. But David wanted to leave much earlier. Soo a flurry of packing..on the road at 10.
The day was spent running around after a shuttle.1210 was on display at Kingston station, we chased some tourists off the Explorer siding.. And then we settled in at the museum. Climbed over the Garrat which was cool.

David gathered some supplies from Harvey Norman, getting 25% off instead of 15%. He was certain to make sure I could use his iPad to upload photos to IG. I was happy, I had something to do. :-) 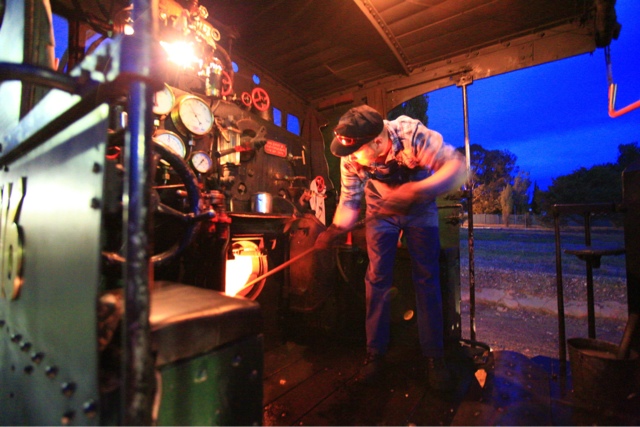 Trip to Bungendore & return with a steam engine, lots of sausages.

Grateful to fall into bed at Karen's.


Sunday
Saw us up early,considering I have night shift tonight, this is an epically bad thing. Nothing is open so I get no hot crossed buns. Karen had left overs so we had those. Very nice. She even made a cute little coffee.

My esterbrook had a flame out, resulting in me being covered in green ink. Ugh. Don't even like this shade. Off to shoot the double header the train to Campbelltown.
I found out,the Picton trains were not 4 past the hour today, but delayed 30 mins and34 past. So I have a 100 min wait at cbt or a 90 min wait at Mittagong. I chose Mittagong. No freight is running, so I could only shoot the birds..

David had supplied me with $20 for lunch on the train. That's a cake, an orange juice and a chicken roast. $15. The coffee machine was broken, but there was no discount for bag coffee. So I avoided it. Can't wait to get home for some sleep..., then off to work. My take up shift for south coast. Not looking forwards to it.