The blue eye of the cobra

Lovely sleep in this morning.  Winning.  I was loathe to get up as I was so very comfortable but today was my day.
Off to breakfast and on the way back via going to book the taxi driver,  I heard a hiss.... This made me stop dead. Off into the bush under my cabin was the most beautiful monocle cobra who was alarmed at my approach and even more alarmed that I didn't run away.  David was more organised and chased after the Reptile with his camera (hence awaiting a pic) before the he snake slithered to a hole under the Cabin.

Totally stoked!  A happy herper.
We collected our washing and headed out.. Looking for our resident on the way.
Mr Lee drove us to the Wee  laundry then off to meet the other Mr. Leigh to meet his tattooist.  We were told meet at the Chalking police station but Leigh wasn't there. He also mentioned the Wat Chalong temple,  so we headed there.
Lots of car parking but no Leigh. I sat in Mr. Lee's air-conditioning and David went to see the temple.  We waited. And waited.. The monks had a ceremony with fireworks and Mr. Lee said today was an auspicious day.  I asked why.. And I got only very lucky. 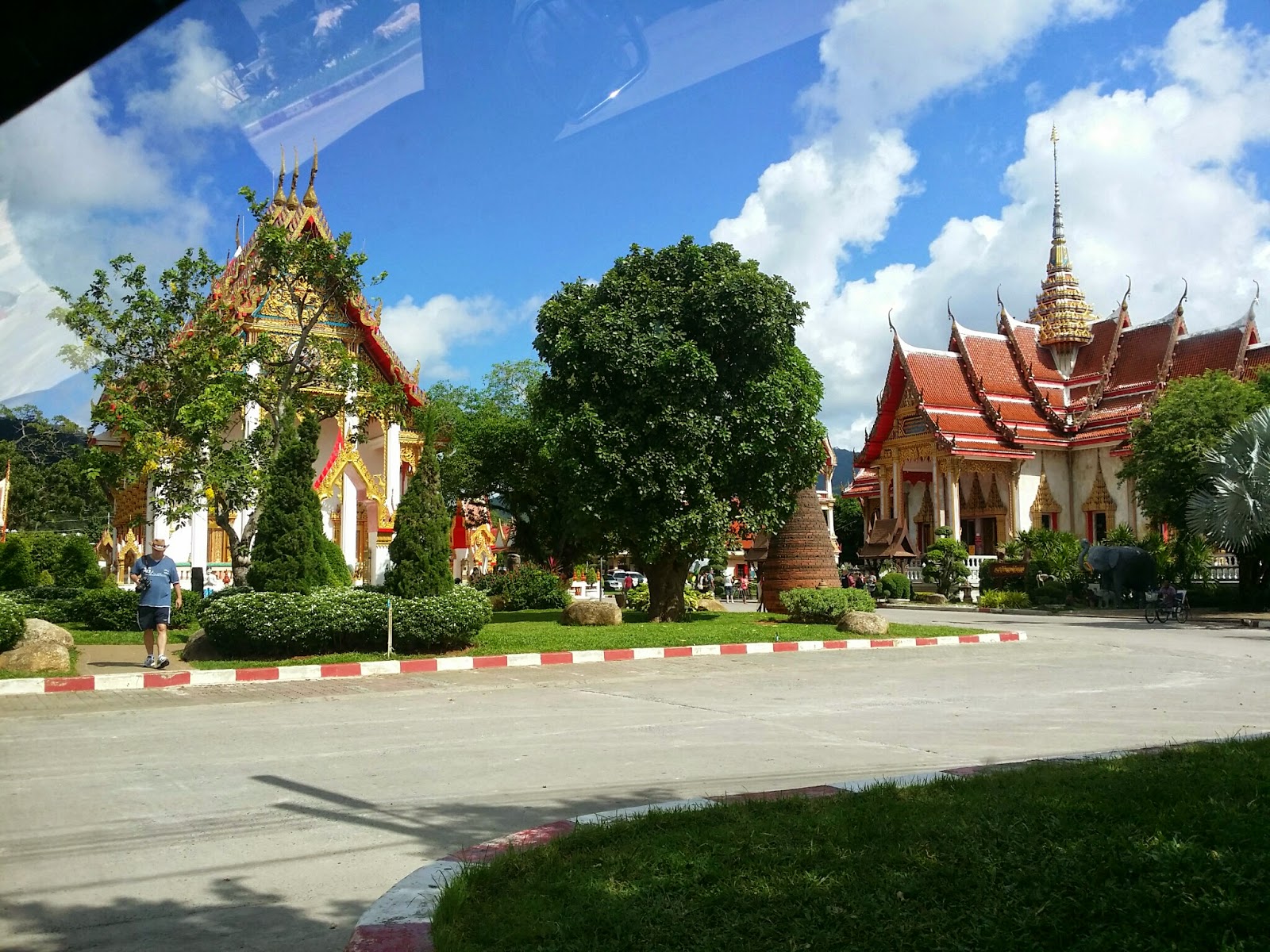 Eventually Mr. Lee rang the hotel and was put through to Leigh's desk. He was at Mangosteen.  Hmm he said he thought we were meeting at 10am..trouble with that excuse is it was now 10am...  Hmmmm

Eventually he turned up on his bike and we headed off.
Arriving at the Dragon's Needle.. The shutters were closed. Oh no! Leigh made a call and they popped over.  Someone was staying in the shop over night but I couldn't work out why. I just shrugged and decided it was Thailand.
We spent a lot of time on my design and finally it was really.  My design was drawn on freehand by Ket the tattooist.
His lively wife fluttered around making sure my modesty was kept which out me totally at ease.  She even arranged water and food for me as time ticked by.  David popped in and out.. Doing a walking tour of the local area.  (Aka finding massage parlours) 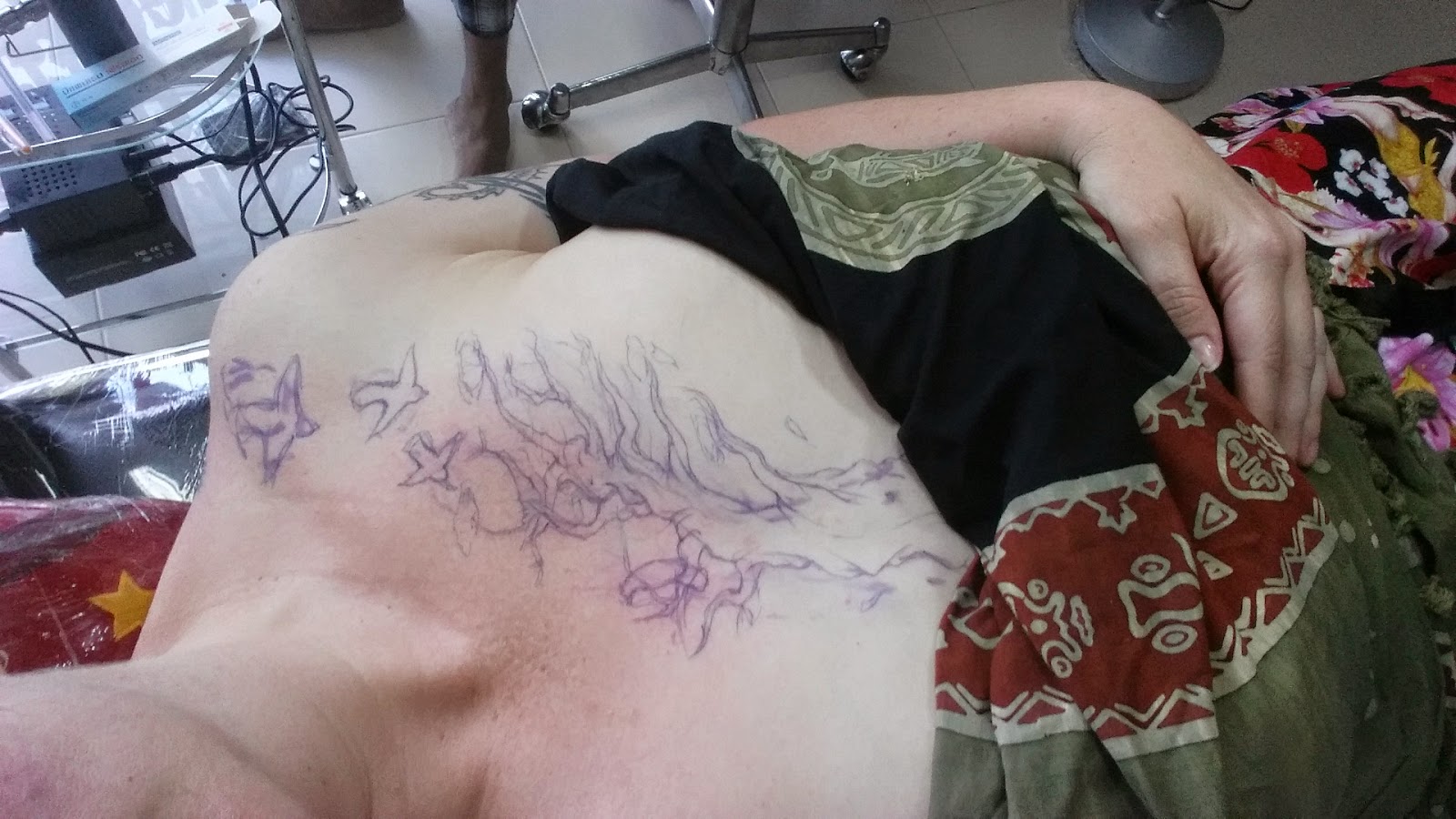 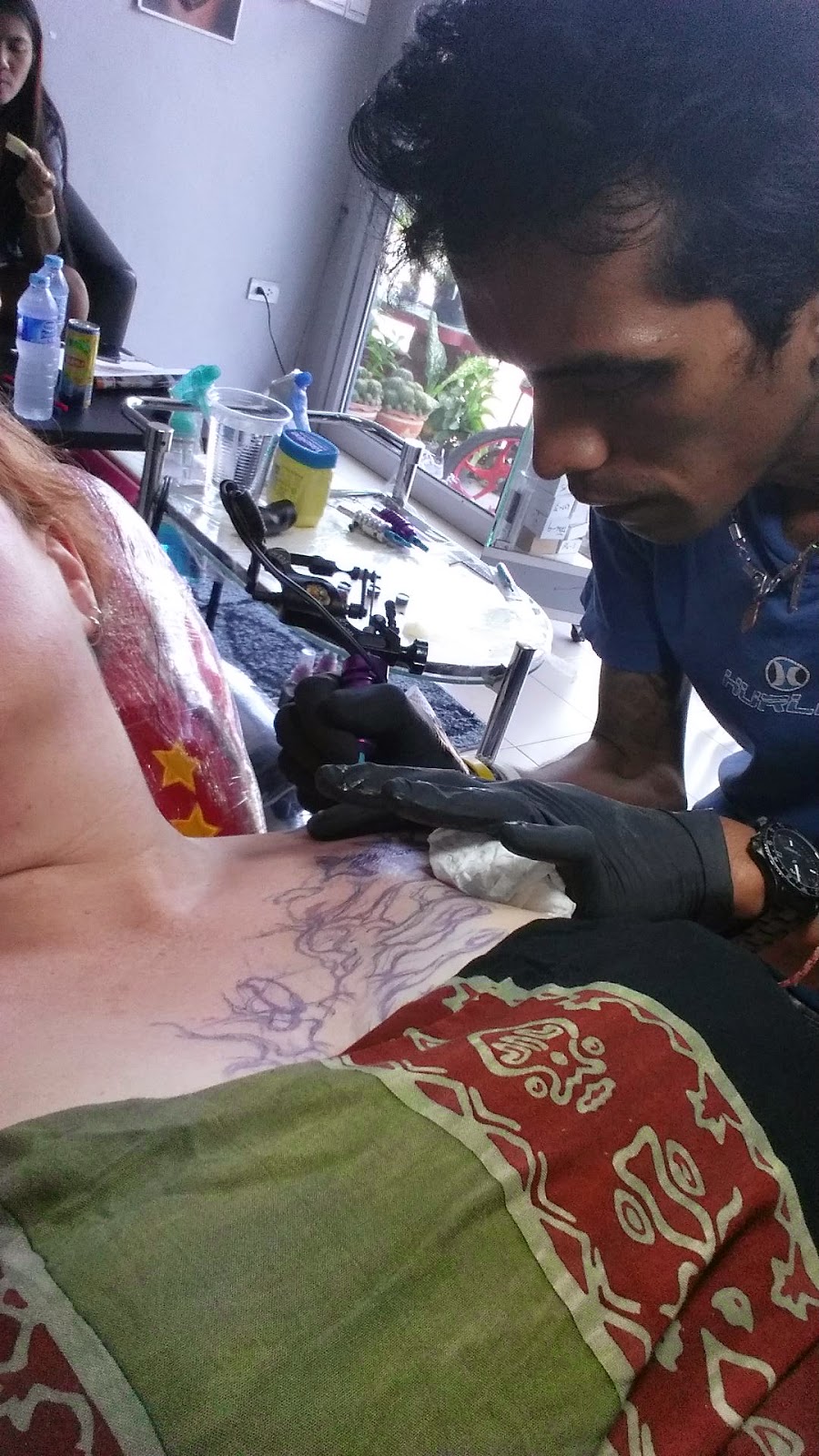 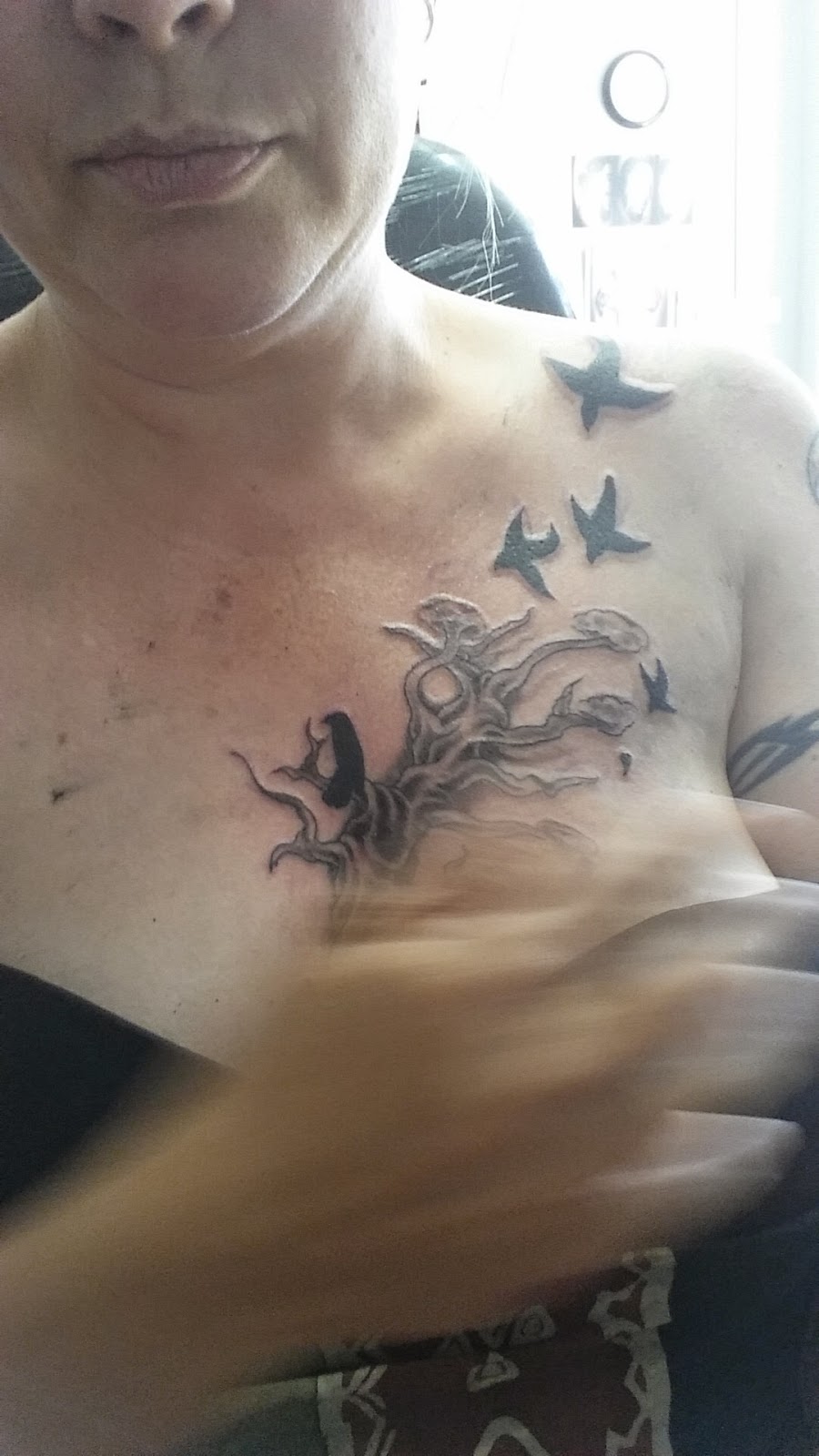 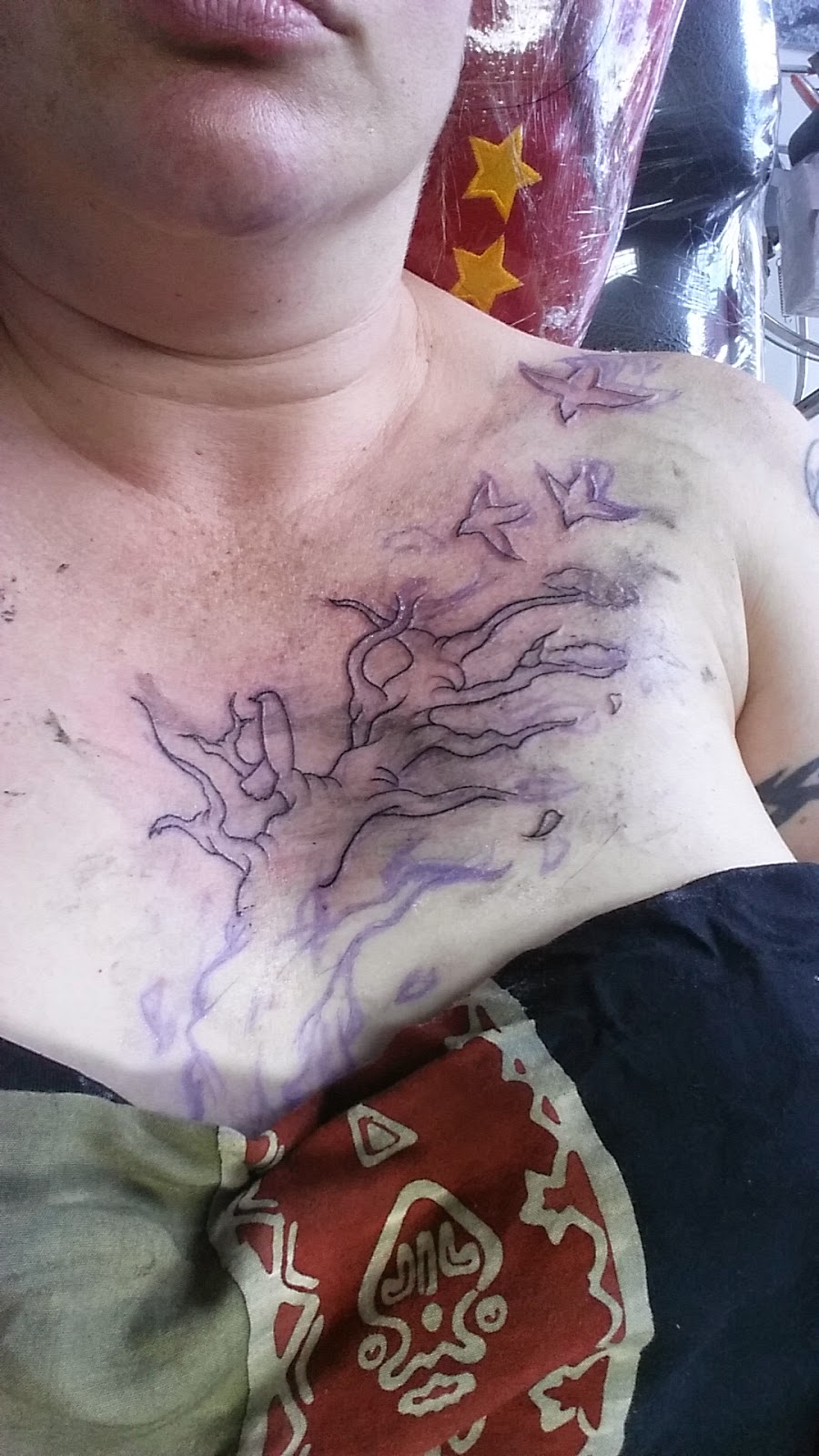 He finished my tree at around 1400..we had taken a break between stage 1 and stage 2 allow me to eat and him to go out and smoke.
My dress was moved around and my scarf changed to keep me covered as much as possible and he soldiered on.
He then started on my octopus to give it more dimension.
THIS HURT A LOT. LOT LOT LOT OUCH OW OW
Stupid thighs.

They called Mr. Lee for me to pick me up as I had paid for a return trip and whilst we waited,  we helped another client with her tattoo.  David had returned earlier and fixed their security camera,  computer and their business cards. (error in spelling in English)

A different taxi turned up. Hmm worried.. We asked.. And was told this was Mr. Lee's friend and that it was paid for.  Phew.

Back to the hotel and I was all high on endorphins so headed back to the infinity tattoo for my other long awaited idea.
I breezed into the tiny studio and the tattooist was shocked to see me back.  I had the photo ready and pointed.  He just said "this?" and then "colour?"  after getting two nods.

David used my note 3 to write the time with a question mark and how much time? I got three hours,  now and 5000฿.

Hmm that would put me finishing around 2130hours and missing a paid for dinner.. Nono.. We wrote 2000hrs and he nodded. Awesome 3.5 tattoos in one day. My new record.

Wandering back for. Dinner.. We showered and changed and had a terrific meal called the 7gems of Asia. I stuck with Japanese and David with the none fish. Haha..
I got up to leave for my last tattoo appointment and just as I walked out Kristy and Neil walked in. Drat. Missed them but I had to rush off.

Back at the tattoo studio, the tattooist was ready with the design I had emailed him in two sizes the 7 inch and the 4 inch. I had requested the 4 inch as my arms are thin and small but he wanted to make sure it was what I wanted.
He got stuck in. I didn't take photos this time as I was happy to watch the street and all the people walk by.
It took three hours as he had said.
David dropped by to walk me back to the hotel..
The heat of Thailand reminded me of why I don't tattoos in the summer.. The sweat stings.
David patched me up to keep the ink from the sheets and we both crashed for the night. 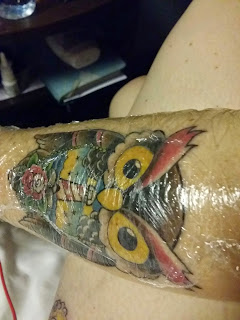 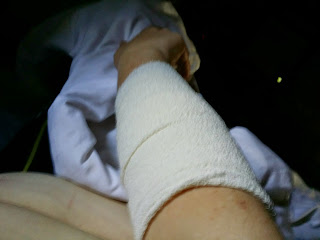 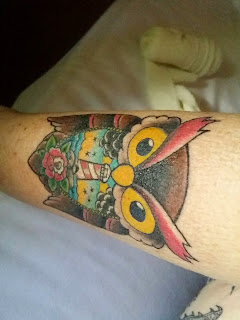