Its been a while since I have blogged.
Everytime I have tried, I tend to get distracted by real life. I am also torn between hurting someone more than I already have and having a great time. Argh.

I have not been diving but I have beem doing my theory for my advanced. I can only pick 5 electives but I would do all of them. Eh, can't so, I will chace a full course for multi level, deep and wreck. At $400 course,I will have to save. (EEEP)

NAB lost $600 of mine and now can't find it. Bloody great I needed that for bills. My savings are now $400 over drawn. ARGHHHHHHHHH

Shifts have been reqasonably quiet and so I have used the time to read theory.

Fabian wanted to do his Open water. I was thrilled , but I was worried he would not get through his theory. He had a whole book to get through in 4 days. He did it.!!!! I was surpised and very proud. In the car home he was talking dive theory. YAY..

The night before his theory test he finished chapter 5. We put on the PADI dvd and drive Heath out odf the room as he was attempting to swat up on his Nitrox theory. He has 5 subjects to get through in 5 nights. I was worried about Fabian but it seems Heath is the remiss one.  Hahaha. 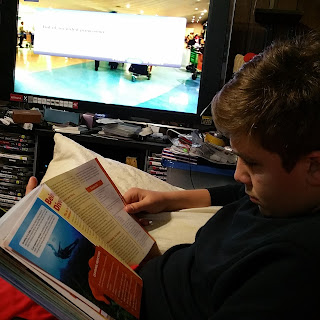 Today I drove F to his class. The lady said it would be around 4 hours. I walked up the road... bought F some cupcakes. Wandered back with the idea of doing more of my extra dive subjects. Fanbian's instructor was eati9ng breakfast so I popped my head into the classroom and my son was sitting quietly. I've finished.. he stated. I finished 15 mins ago...
I went to get his instructor and she seemed surprised. She marked his final exam and he got 94%. 3 wrong but they were not safety questions. She has nothing for him so, after just one hour, Fabian had finished his open water theory. So much for needed 4 hours. My son has the knack for this subject. He doesn't like navigation but neither do I. He does take after me after all.

We took the long was home ( I missed the turn and ended up on Henry Lawson drive)
Fabian and I pulled into Campbelltown just as mother was reversing. We had lunch at the cafe. They actually made terrible coffee. BOOOOOOOO They are usually great . Mother and I shared a pumpkin and pine nut salad and Fabian stuck with an egg salad.

Mother is the master of spending my money.

The state of Origin is timorrow and the local butcher made these..... 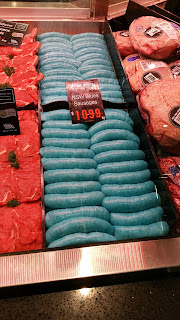 I had to buy some :)
Don't worry, they are chicken sausages with blue food dye. LOL.

SO up and ridiculous hour... Driving Fabian to Scuba via the F6 today as the traffic on the M5 is beyond stupid. The trouble is , the F6 is an esxtra 25km, the M5 is longer in time...What to do.

The temp when we left was -1C. Heath defrosted my car for me and I had it runnning for a whiloe to warm up. The ice was thick. I am sure Fabian is pondering his sanity at diving in the winter.

Today is pool work so I need to stay out. ONe of the ladies said I could have dived this arvo but I have 7 dives in the next three days so, I'll sit this one out.

Abyss have kindly left me lurk around the shop for a few hours then I will wander off and see if I can park around Miranda. I am not really wanting to go to the shops but I do need to sort this money issue out. BOOOO to banks,

Lets see how the kid goes :)