The week that was.,.. fairly dull. Nights changing to early ams this week. Of course that means I have late arvo shifts for the weekend to be followed by no sleep day work. YAY. Ugh... Some days just shoot me.

The end of last week, I lost my beloved black and red number plates.  Some genius, when they issued these plates didn't realise that in real life scenarios, these plates and the blue equivalent can been hard to see. I have followed some blue and black plates in the past and had to be almost up the guy's arse before I could make out the number plate so I see the need for recall but I love my plates. SO it was a sad day. The replacements were orange and they rubbed me the wrong way so the RMS issued me red plates with white. HMMMM.. I don't like but other people do. Its the best of a bad situation. Just wish they didn't still want to charge me the annual fee to have plates I didn't want. Que Sera.


The weekend was so cold that my area of control literally froze. We had track work planned with buses replacing trains but the police closed the roads so.... we had to come up with an ad hoc train service. Ugh Nightmare. Still, the staff did an awesoe job and I had drivers ringing up to volunteer to help and run extra shuttles. Most of the staff were snowed in and one signaller had to sleep in his car as the Katoomba Pub (YES I WILL SHAME THEM) refused to open reception to give him a room for the night. Seriously?? The area is shut down and you can't be bothered to sell a room?? YOU would rather an empty bed than make money? More than that, you can't help a worker sleep for his next shift? What is wrong with these people? 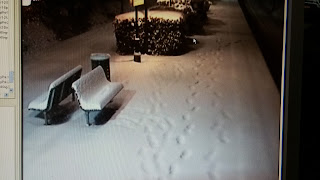 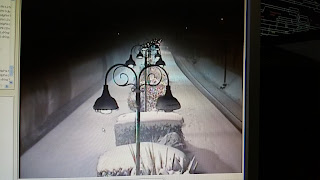 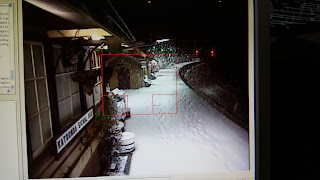 For three days it snowed. The CEO told me it was the heaviest snow they have had since around 1965.
Being so icy, I was dressing in my best comfy clothes.. ha! aka Daggy. 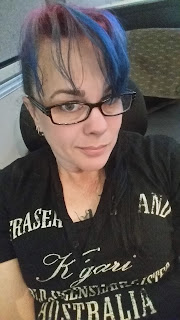 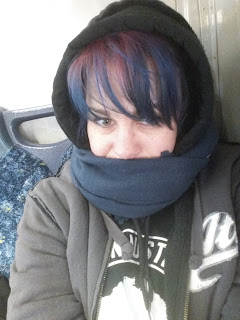 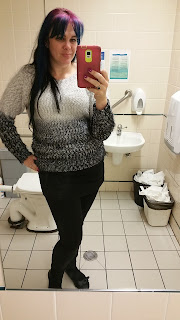 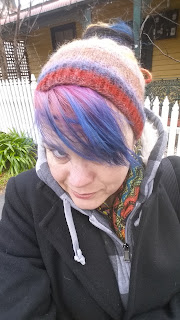 Many many thanks to Randy and her mother Tina for these beanies.. a life saviour. You can get your own from their etsy store .

The weekend was so hectic that Heath arranged a hotel room so I could actually get some sleep. This idea was a life saver!!  Trouble is, his night in the city made me jealous when I had time to catchup on his adventures. The room even had a harbour view! Lovely. Alas, no late check out but it was ok as I will always get up for a breakfast spread. I love breakfast and its this passion that is my downfall in my weight loss, or lack there of. ugh. Back to size 16/18. I am berating myself and this makes me depressed and vicious circle, drives me to chocolate etc etc etc. I HAVE to pull myself together, I do love my runs so I am annoyed at myself that I'm back to walking after getting back to 5km runs. Fuck.  Back to square 1. Walking is soooo boring alone so I just don't . Even the dog cant help here.


Had a perfect Sunday.. it was super relaxing and warm. Sydney put on blue skies and 18C. Perfect winter's day (I can here my UK and USA friends laughing their heads off now)
Monday was cold again and grey but as days off go, it was ok. I washed all of the dog's blankets and he sooked up next to me on the sofa (Hmm I should have exercised here). I bleached out my pink hair and added turquoise to mix it up. I was, as first unsure if I liked the colour, so far from my traditional red. I saw the black at the back was now faded and doesn't suit any more. OK with red.. I think all blue would be better than black and blue. 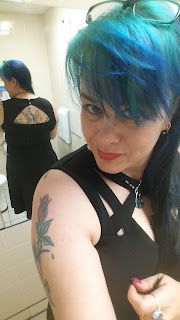 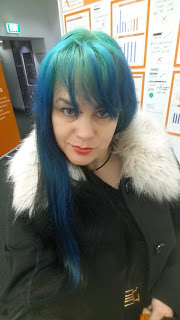 After work Wednesday, with a trip to the shops for a colleague who needed some tea from my area as Penrith didn't stock it any more... I decided to have a trim. Its been a year since I had a hairdresser near my hair and that was in Thailand. My hair gets long and ratty but I usually don't have time to deal and just chop bits off the ends when its too yucky and dry. I got her to use my usual dye and she bleached out the back. With only some success, she did the roots all turquoise but the new dye lot was more blue green than green blue..
Next time, I'll try a brighter base colour and see if a new dye lot will be blue or green. :)

Lets try a back photo..... Poor lighting in the toilet.. Ugh.. Still..  I have been thinking of trying War Paint colours.. I adore my english dye but the shipping is a killer. Fudge (seen here) is great but you don't get much for $19.. War Paint is $17 for  100ml. Had anyone tried it? And yes I have tried Manic Panic, for years, but it fades far too quickly in my life and activities. 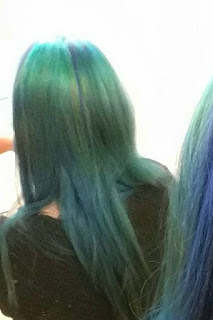 It looks green here but outside its more blue. I am obsessing ... hmmmmmmm
I have been trying to get time to do some social diving but the work gods have decreed I need to remain in my cave. BOOOOO

Least its not snowing