I have been on late shifts for 5 and a half week. 5 and a half very very LONG weeks and I have found they grind my mental and physical health to a pulp. I have has a wonderful 2 hours with H this afternoon, as he finished early and I started late. He bought me breakfast and a coffee and we did some chores we had outstanding. OK not romantic to most ppl but I haven't seen him in the daylight for 5 weeks. (With one day being an exception) I have to send selfies so he remembers what I look like and we have only communicated via instant messaging and phone calls. Its a shit way to live.

Today i made the step outside my comfort zone and started to confront my excessive addiction to shopping. I do LOVE my City Chic and that was ok only 2 dresses a month but its blown way out with ASOS, Torrid, ELOQUII Marks and Spencer and go knows what else.. OH Ezibuy.

I gave a third party control of my money. Yes. I have given away my one thing I have fought to keep for years since being left on the street. Its a larger step that I thought it would be and a hurdle that I need to overcome. Just as with a gambler you need to be treated and controlled until you can manage yourself. I have some cash per fortnight and my bills will be managed.

I feel 12 years old in a way. Sigh. Still to grow and move forwards, a chance has to be taken.

I will survive and kick this addiction. :)
~~~~~~~~~~~~~~~~~~~~~~~~~~~~~~~~~~~~~~~~~~~~~
Exciting day yesterday when a car drove past, throwing out a cigarette and set a bush on fire. I didn't see the fire, but the dog did and went nuts. He let I had to come look and just as well I did. I rang 000 then moved my car which was next to the spreading fire. ARGHH. Everyone who pulled up asked me if had rung 000.. YES!! I tried to get my hose to get water on to the fire but the street is too wide but by now the neighbours were woken up and the off duty firies came over and went on to the property on fire and took their hose to use, They did a great job. By the time the fire brigade arrived, it was out and they made sure nothing was still smouldering. 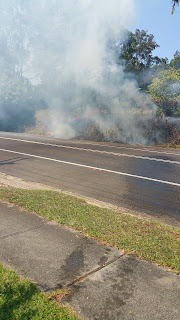 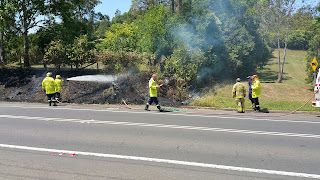 I was out on the heat in a pin-up dress I was going to do a photo shoot in. No photo shoot and a very sweaty Yvonne. I ended up going to work in this dress.

I was going to do Going out challenge for NZ Curvettes but I have no mojo and not going out. My Wednesday evening with friends has been cancelled and I have had to cancel my hotel room. Bummed on multiple levels. A romantic night in the city. Amex. Drinks with people I haven't seen for 4 years AMEX. A friend in a heap of private pain and I really don't feel able to be cherry enough to dress up.

Dressing in daggy jeans and tees has given my confidence a hit and so this dress did pick me up. I felt sexy and I got a lot of compliments. I had to use a hair pin to keep my bra covered as it is slightly big in the bust for my small assets.  In the photo above I had cardigan clips made by Jubly-umph but for work, I had a hair clip made by Randi Gray (Or her lovely mother Tina Ray) Randi how has a new shop The Wyld Wood and she makes the most wonderful knitted hats bit I digress..

I have received some City chic dresses as they had a 2 day only sale of $50 for maxis. I grabbed the ones I have been lusting over and were in the sale. Alas not all of my favs were included but lets not be greedy! (HA!) 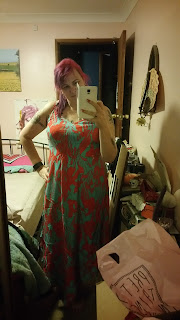 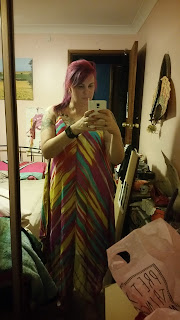 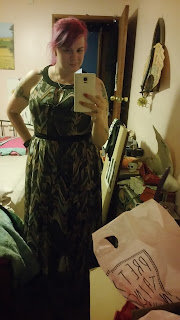 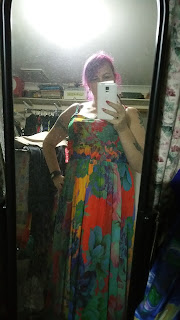 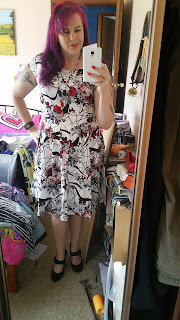 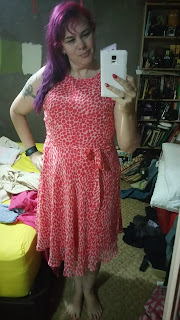 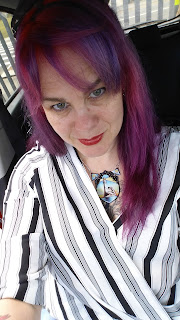 The city chic dresses are


The white dress was from Ebay, a modcloth dress that is discontinued but damn its pretty.. The orange spots is a Heine dress from  Ezibuy but Heath picked the brown version (As that was a smaller size)

The top is from Asos and I am wearing a size 16. Its a generous size so I sized down but maybe a 14 would also do? Hmm This top was light and the cross over had a stitch to keep it from exposing your bra. One of the best shirts I have come across recently.

H finished early yesterday and I had a 1607hrs train so I could meet him for coffee and actually see him in the daylight.
I rushed and grabbed the closest dress. Missing brekkie I ended up in a Capture European dress that actually looked amazing. (Damn its sold out now.  I bought the size 44) 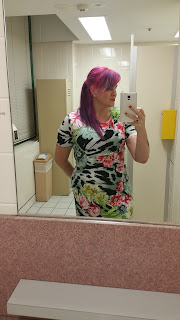 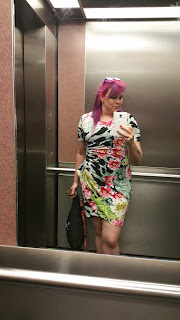 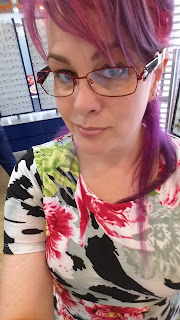 I had the most wonderful afternoon just doing mundane real life things and a light meal of coffee and some steamed buns and dim sims. I hope H liked the dress because it takes a heap of control wear to get that shape.. It was 30plusC and I was HOT!! lol The things we do for a date.

Off to work for the final two late shifts than three weeks of normality and 4 days off over xmas for the first time in over 15 years!!

What do you have planned? What do normal people actually do at Xmas??? How will I cope in an extremely limited budget?? Is this the end for my fashion??